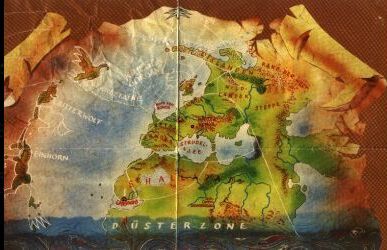 Welcome to the MyraPedia, the free collaborative online encyclopedia -in English and German- on Myra, the SharedWorld project started in 1982 and translated to English since 2005, and Mythor, the series of 193 novelettes from German publisher Pabel-Moewig (1980s), 17 hardcover novels from German publisher Weltbild (2000s), 5 paperbacks (2010s) and the 2015 ebook release (of all 193 serial novels) - and hopefully many short stories and NaNoWriMo novels coming from you in a language of your choice.

We'll be starting soon-ish with a new #Fantasy #RPG campaign of #DnD - A paladin freakshow that includes a variety of races and only one class (Dreamknight as per RPG Wikia). ;-) Done by voicechat over Discord. Interested? Head over to our MYRA Discord (see below).

Dreamknight as a character class:

Myra-Races, which will be permitted:

MYRA-Roleplay on Discord If D&D is your thing, just come to Gwynddor on our Discord, roll your non-human Dreamknight - and roll for initiative: https://discord.gg/QE32V2r

Next NaNoWriMo, I'm confident that we will get the seeds of a fantasy-novel for adults or young adults set on Myra, by me, by you or from all of us Fantasy-Nanovellists. It is not impossible that the Myra-Nanovel will be a real success. Because as A. H. Weiler supposedly once said: "Nothing is impossible for the man who doesn't have to do it himself.".

Where we stand today

To write a new MyraPedia article, enter the page title in the box below.

What MyraPedia is and isn't

MyraPedia is intended to be an online encyclopedia of everything on Myra and Mythor. It can be a place to put down entries on everything in the part of the world you adopted. Do not forget the language tag for single language entries.

MyraPedia is not a place for online discussions, we have MyraWorldbuilders community on Discord for that, and not just a place to showcase your work, except of course work that is set on the world Myra. Author pages for published stories and novels are ok, personal homepages, obviously, are not (use the userpages instead to introduce yourself).